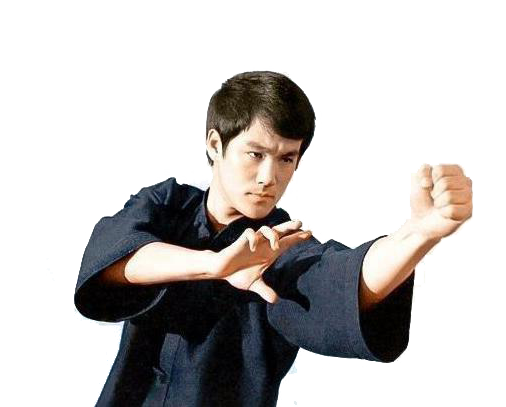 Bruce felt that the straight lead was the most integral part of Jeet Kune Do punching, “The leading straight punch is the backbone of all punching in Jeet Kune Do”. The straight lead is not a power strike but a strike built for speed. The straight lead should always be held loosely with a slight motion, this adds to its speed and makes it harder to see and block. The strike is not only the fastest punch in JKD, but also the most accurate. The speed is attributed to the fact that the fist is held out slightly making it closer to the target and its accuracy is gained from the punch being thrown straight forward from your centerline. The straight lead should be held and thrown loosely and easily tightening up only upon impact adding a snap to your punch. The straight lead punch can be thrown from multiple angles and levels. 1. High straight lead 2. Medium straight lead (to body) 3. Low straight lead 4. Slanting right 5. Slanting left 6. Double straight lead “Your leads hand should be like greased lightning and must never be held rigidly or motionless. Keep it slightly moving (without exaggeration) in a threatening manner, as it not only keeps your opponent on edge, but can also be delivered faster from motion than from immobility. Like a cobra, your strike should be felt before it is seen”.

Bruce felt explosive attacks with no tell signs of intention were best. He displayed that the attacks should catch the opponent off guard, throwing them off balance, leaving the opponent unable to defend against further attacks. “The concept behind this is that you initiate your punch without any forewarning, such as tensing your shoulders or moving your foot or body, the opponent will not have enough time to react”. The key is that you must keep your body and arms loose, weaving your arms slightly only becoming tense upon impact. Bruce Lee wanted no wind up movements or “get ready poses” before any of your strikes were thrown. Bruce explains how that any twitches or slight movements before striking should be avoided as they will give the opponent signs or hints as to what you are planning and the they will be able to strike you first while you are preparing an attack. Non-telegraphic movement is an essential theory to Jeet Kune Do and Bruce felt it to be a must have in your fighting arsenal.