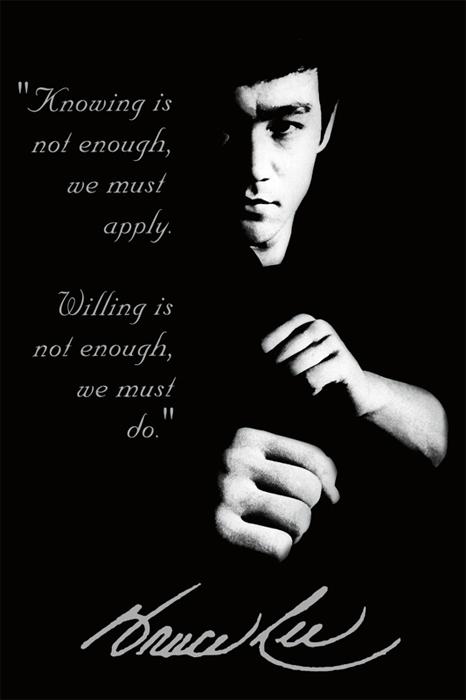 What is Jeet Kune Do philosophy? JKD as it survives today — if one wants to view it “refined” as a product, not a process — is what was left at the time of Bruce Lee’s death. It is the result of the lifelong martial arts development process Lee went through. Bruce Lee stated that his concept is not an “adding to” of more and more things on top of each other to form a system, but rather, a winnowing out. The metaphor Lee borrowed from Chan Buddhism was of constantly filling a cup with water, and then emptying it, used for describing Lee’s philosophy of “casting off what is useless”. He used the sculptor’s mentality of beginning with a lump of clay and hacking away at the “unessentials”; the end result was what he considered to be the bare combat essentials, or JKD. The dominant or strongest hand should be in the lead because it would perform a greater percentage of the work. Lee minimized the use of other stances except when circumstances warranted such actions. Although the On-Guard position is a good overall stance, it is by no means the only one. He acknowledged that there were times when other positions should be utilized.

Lee felt the dynamic property of JKD was what enabled its practitioners to adapt to the constant changes and fluctuations of live combat. He believed that these decisions should be done within the context of “real combat” and/or “all out sparring” and that it was only in this environment that a person could actually deem a technique worthy of adoption. Jeet Kune Do Philippines

Bruce Lee did not stress the memorization of solo training forms or “Kata”, as most traditional styles do in their beginning-level training. He often compared doing forms without an opponent to attempting to learn to swim on dry land. Lee believed that real combat was alive and dynamic. Circumstances in a fight change from millisecond to millisecond, and thus pre-arranged patterns and techniques are not adequate in dealing with such a changing situation. As an anecdote to this thinking, Lee once wrote an epitaph which read: ‘In memory of a once fluid man, crammed and distorted by the classical mess.’ The “classical mess” in this instance was what Lee thought of classical martial arts.

Principles of Jeet Kune Do

The following are principles that Bruce Lee incorporated into his Jeet Kune Do.He felt these were universal combat truths that were self-evident, and would lead to combat success if followed. Familiarity with each of the “Four ranges of combat”, in particular, is thought to be instrumental in becoming a “total” martial artist.

JKD teaches that the best defense is a strong offense, hence the principle of an “intercepting fist”. For a person to attack another hand-to-hand, the attacker must approach the target. This provides an opportunity for the attacked person to “intercept” the attacking movement. The principle of interception may be applied to more than intercepting physical attacks. Non-verbal cues (subtle movements that an opponent may be unaware of) may be perceived or “intercepted”, and thus be used to one’s advantage.

The “Five ways of attack”, categories which help JKD practitioners organize their fighting repertoire, comprise the offensive teachings of JKD. The concepts of “Stop hits & stop kicks”, and “Simultaneous parrying & punching”, borrowed from épée fencing’s and Wing Chun’s concepts of single fluid motions which attack while defending, comprise the defensive teachings of JKD. These concepts were modified for unarmed combat and implemented into the JKD framework by Lee, to complement the principle of interception.